The British King Mine is located approximately 320km north of Kalgoorlie in Western Australia.  The project is well serviced with roads and utility infrastructure due to its proximity to the towns of Leinster and Leonora as well as the nearby Darlot Gold Mine (RED5 Ltd) located only 8km away by road.

British King is a classic example of a Western Australian ‘Orogenic Gold’ deposit.  The mineralization is an East-West oriented quartz vein reef hosted within mafic and felsic volcanics within the Norseman Wiluna greenstone belt.  Drilling has shown that the orebody extends the entire span of the project tenement and depths well beyond those historically accessed.

The project area has a solid mining pedigree with intermittent production for more than 100 years.  Historically, mining was conducted through underground development feeding a number of small shafts. It reputedly produced 8,700oz from 15,600 tons at an average grade of 17.3 g/t. Historically it has been described as a solitary east-west quartz reef 1-2m wide, dipping steeply south, and enclosed within felsic-intermediate volcanics. Historical reports make reference to a thinner second quartz reef immediately adjacent on the northern side.

The project was acquired by BKGM in 2014 with a view to re-establishing underground mining. Under previous management the mine was dewatered, Central Shaft rehabilitated and the main development drive at 75 metre level was refurbished and extended east and west. Return airway shaft and secondary egress were re-established, old workings mapped and the mine camp was refurbished at a cost of $6.0m. This was followed by trial mining in 2016-2017 which produced 5,000t @ 5.2g/t from development drives and 600t of stoping ore at 16g/t at 75m level delivered to Darlot mill, then owned by Goldfields Australia. Trial mining was discontinued due to inadequate hoisting capacity however the exercise confirmed the high-grade nature of the deposit and its amenability for conventional CIL treatment.

The mine is now under care and maintenance. The strategy is to grow the present gold resource by extensional and deeper drilling to feed into a new optimisation study and development of a new mine plan.

In November 2017 Kalgoorlie based consultant Minecomp completed a conceptual open-pit optimisation study on behalf of the Company under which possible starter pits at western and eastern end of the orebody would be used for box cut / decline access to the high grade ore at the 75m drive level and below. The Base Case study at AUD1,600/oz showed the surplus cash generated from the starter open pits would be sufficient to self-fund the declines plus leave a significant additional surplus that would be reinvested into further development.

In December 2019 Minecomp updated the ‘scoping’ level open-cut study using a revised AUD2,000 /oz ‘Base Case’ scenario. As expected the results show a much more attractive financial return. The study also highlighted there would be a significant financial benefit if the deposit were mined without the artificial limitation of the lease boundary to the west and the east, and into the adjoining mining lease M37/631. This would result in deeper and longer open pits on the western and eastern side of the deposit and capture high grade mineralisation closer to the surface along strike of the full 400m length of the lease as well as the contiguous mineralisation within the surrounding mining lease. The Company believes all parties would benefit from developing the project as a single mining operation and plans to explore a possible joint effort to do so with RED5 and CIO. 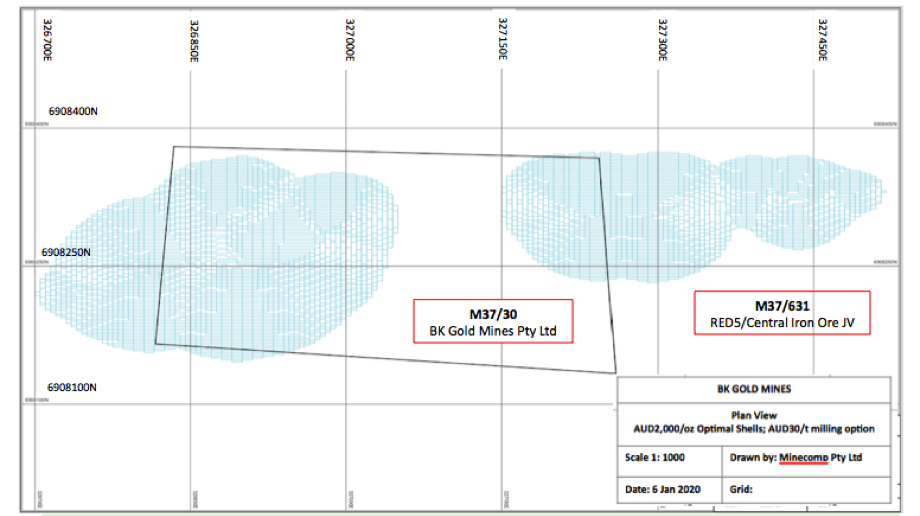 A drilling programme is now planned to verify the 1995 drilling and to test for extensions of mineralisation below the historical workings and along strike along the lease.

The high grade tenor and upside potential for British King mine within ML37/30 is indicated by a JORC 2012 Mineral Resource estimate of 160,300 tonnes at 5.12 g/t Au for 26,400 oz of gold (reported above a 1.0g/t cut-off) and classified as Inferred pending a planned drilling program lying within the lease to verify 32 holes drilled by Target Resources in 1995 which forms the basis for the present Mineral Resource estimate.

The mineralisation is open at depth and along strike in east and west into surrounding lease M37/631 (Central Iron Ore Ltd and RED5 JV) which is estimated to host additional resources of similar grade and tonnage however the Geomin mineral resource estimate has been restricted by the M37/30 lease boundary to the west and to the east.

The above estimate is based on Target Resources’ 32 RC holes drilled in 1995 mainly in western section of lease, with 18 holes on main reef. Estimate generated using MicroMine software using a top cut of 28 g/t Au. Mineralisation within the lease is located towards the western end of an east-west mineralised quartz reef structure. Data from drilling and underground development shows the reef to be mineralised for the 400 metre length of the tenement. The higher grade portion of the mineralisation appears to plunge 15° to the west with the Main Vein varying in thickness from 0.4 metre to 2.0 metres.

Drill density varies from 10m X 20m in the upper section of the orebody to 30m X 30m in the lower portion. Wireframes have been extended 15m past the lower drill intercepts. Maximum depth of historic mining was 75m below surface (trial mining in 2016), however majority was only 41m below surface. Multiple ore shoots have been interpreted from drilling, trial mining and face sampling, however one continuous reef hosts the majority of Au ounces. All tonnes have been classified as Inferred mainly due to the absence of available drill samples from prior drilling. Further drilling is warranted to test for possible repetitions at depth along strike, and to increase confidence level of reported resource tonnes for mine planning.

The table below shows highlights from Target Resources RC drilling 1995. Intercepts reported by Ian Cooper of Cooper Geological Services in a November 2006 NI 43-101 Report. Holes were drilled at between 70 and 75 degrees at right angles to the strike of Main Reef Structure, shown by underground development to be dipping at approximately 60 degrees in the opposite direction to the drilling. Results indicated best mineralisation below 75m level is located in western section of the lease where drilling located wider zones of siliceous and haematitic alteration associated with low gold grade mineralisation (drill holes BK107 and BK105). Records of previous owners (Goode, Gould and Kamin) show production in the period 1990 to 2,000 to have been 4,812 tonnes for the recovery of 95.4 kg of gold (3,067 oz at 19.8g/t Au).

British King – high-grade mineralisation – open along strike and at depth 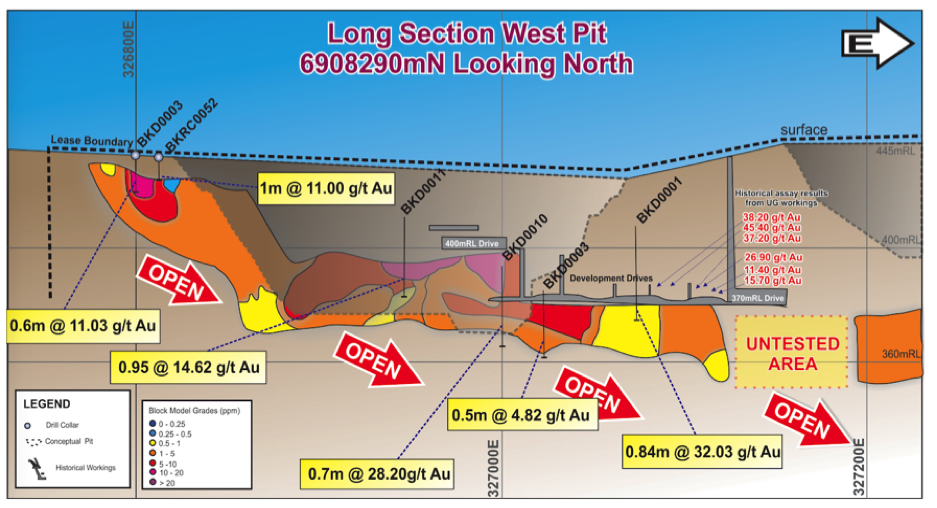 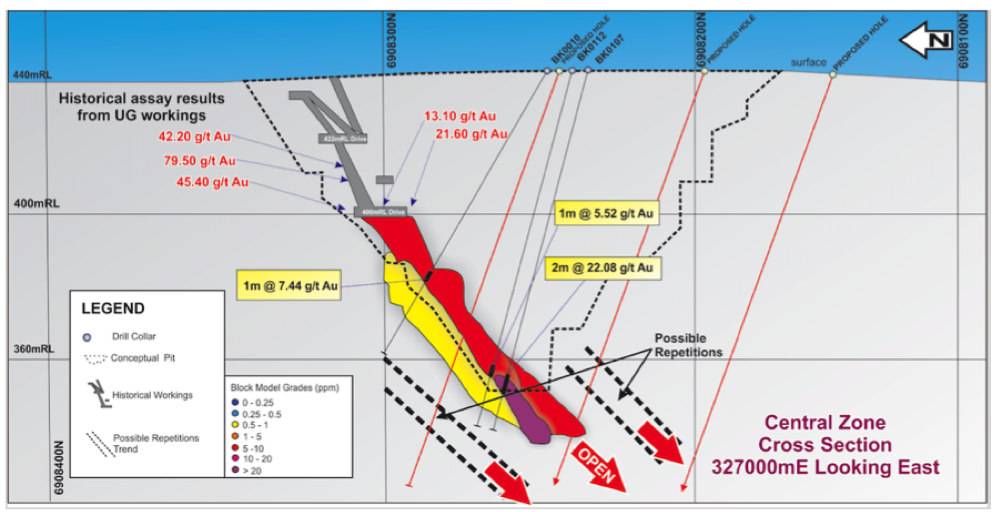 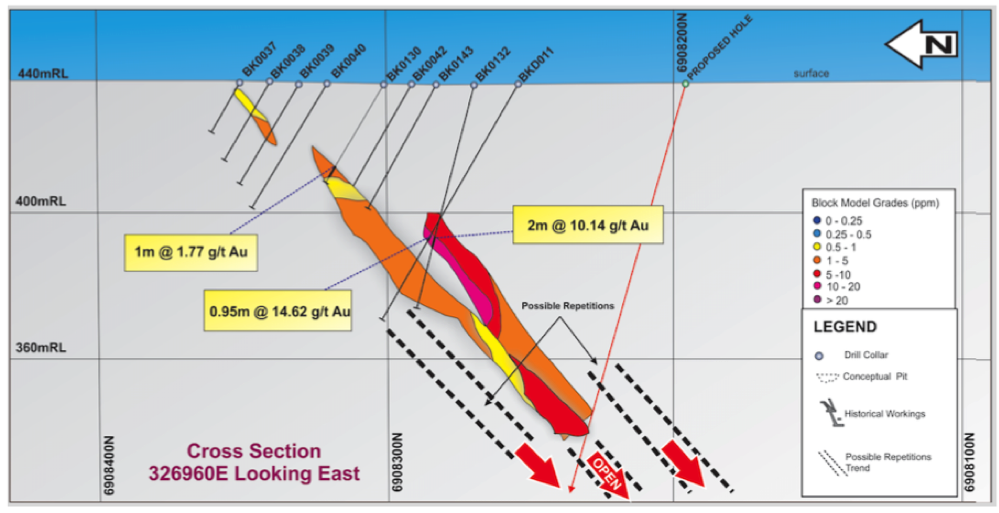 The information above that relates to Mineral Resources at British King deposit complies with the JORC Code and has been compiled by Mr Paddy Reidy MSc (Mineral and Energy Economics), BA (Hons Geology), Director of Geomin Services. Mr Reidy has sufficient experience that is relevant to the style of mineralisation and type of deposit under consideration and the activity being undertaken to qualify as a Competent Person as defined in the 2012 Edition of the JORC Code. Mr Reidy consents to the inclusion in this presentation of the matters based on his information and the form and context in which it appears.

Information in this presentation that relates to historical exploration results reflects information compiled from Wamex reports by Dr Dennis Gee, a director elect of the Company and a member of AIG. Dr Gee has sufficient experience which is relevant to the style of mineralisation and type of deposit under consideration and to the activity upon which he is reporting on as a Competent Person as defined in the 2012 Edition of “The Australasian Code for Reporting of Exploration Results, Mineral Resources and Ore Reserves. He consents to the inclusion in this report of the matters based on the information compiled by him, in the form and context in which it appears. Historical exploration results contained in Wamex were prepared and first disclosed prior to inception of JORC reporting guidelines under JORC.  The information has not been updated since to comply with the JORC Code 2012 on the basis that the information presented has not materially changed since it was last reported.